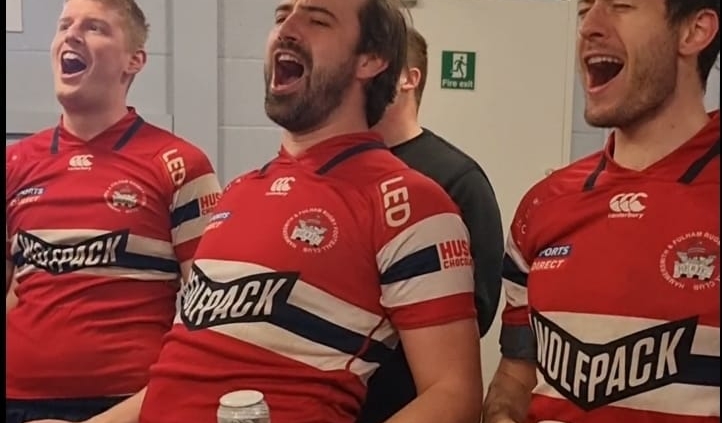 The Hammers turned up on a glorious spring morning know they had something to prove, coming off the back on a poor result away down at Horsham, a result that was in no way a reflection of how the season had gone. On their part, Cobham arrived at Fortress Hurlingham off the back of a strong victory at home to Medway and were placed 7th compared to the hosts 4th place.  With a big crowd down for Old Hams day, the beers and food digesting into the veins of the apprehensive crowd, the Hammers started well with an eloquent kick return from Peter ‘fleet foot’ Morris who burst through the open space of the lacklustre defence to offload out the back to Henry Martin who managed to collect the pass and dot down in the corner after 10 minutes. 5-0 to the men in red.

Cobham came back hard and fast and after some patient work, managed to power over after 16 mins, with the fly half missing his conversion. 5-5. Almost immediately from the kick off, Joe ‘Caravan’ Carolan found himself out on the left wing in acres of space to cruise past the first man in third gear before putting on the afterburners and cutting inside in 5th to make the score 10-5. Like a well-oiled machine, the Caravan knew he had to impress, with a fleet of Caravans down to watch on the far side with a few plus 1s, wanting to show them what he was all about.

After some back and forth territory jousting, the Hammers kicked a penalty into the corner, leading to a well-constructed catch and drive maul before flinging the ball out wide. Up popped Tom Proctor with a quick pick and go, landing over the try like a flying salmon. This time the Caravan found his built-in dashboard sat nav and the Hammers took a deserved 17-5 lead.

Another excellent kick return after a lovely angle bending switch from Peter ‘snakehips’ Morris and Tim ‘Honeybadger’ Russell ended with a ball out wide, Caravan again taking the ‘goal-hanging’ plaudits, cutting inside and out again, evading the recent wave of Cobham stomach bugs with precision to dot down in the corner, another successful touchline conversion making it 24-5.

Into the second half and with a bonus point secured, it was an opportunity for the home side to really lay down one final marker in the penultimate game of the season.  However, after conceding some early penalties, Cobham managed to get their driving maul working effectively to score two well-constructed tries in quick succession. 24-15.

Back came the wave of red attacks, with Alex ‘Spice up your life’ Spicer carrying consistently well before the parting of the Cobham defence came, like Jesus parting the red sea, in the form of our very own man of God, Russell. Caravan with the conversion to take us to 31-15. Shortly after this, came a moment of madness by Prop Idol U16 candidate Jacob ‘One Blue’ Poulton, who gathered a spilled ball before launching it with his right boot towards the home fans, marginally avoiding a screaming baby. No surprises for the winner of the DOTD nomination.

Some fantastic breakdown work from a number of the Hammers men after a good Thursday night jackal session followed by a team social (but interrupted by an unnamed blond), and things were looking positive for a strong finish. Again, however, Cobham were only really interested in playing like that tight friend who never buys you a drink at the bar, and went over with another catch and drive maul, much to the disappointment of the fans who had come out on a lovely sunny spring day expecting some running rugby from both sides. 31-20.

More patient play from the men in red followed, before Matt ‘Knome’ Newman ran a lovely ‘Gregan’ line with the skipper extraordinaire who burst through the gap, carrying a couple of defenders with him before dotting down next to the posts. Another conversion taking the game to 38-20 and a very happy Caravan lady friend on the touchline. Some more nice play down the short side followed, again with Russell and Caravan combining before Newman received the offload and dotted down over the whitewash to take the score to 45-20.

The opposition then scored 14 unanswered points, but I think they were all from lineout mauls so not much further to add. A very good evening followed, as the touring blazers of HFRFC frequented a number of the local establishments until the early hours, with one member of the club posting on the club whatsapp group the following morning about a missing house mate. You’ll be pleased to hear Mr Howe, who teaches Year 7 Geography, was found without damage.