On yet another trip to the other side of the country to play Hackney away, the 4s were on a bit of a downer following the long trek east.

Bolstered by a good squad and a dominant previous week  victory over Ickenham, the boys were confident at kick off. Game started at a fast pace with our lads probing for turn overs from the off, despite some suspect reffing the boys managed to get the ball back swiftly. First period of possession resulting in a strong forwards try following some big ball carries up the middle, big Phil Lord crossing the whitewash. The second try followed soon after, a brilliant team try that passed through 10 hands and ended up with Tom Dixey smashing over from close range. 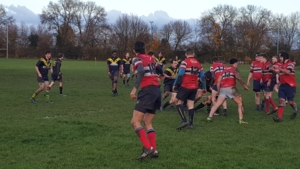 With the wind beneath the sails the boys kicked on and scored again showing some silky skills and absolute dominance in the set piece, line out spot on with Nick Haigh jumping brilliantly, scrum going well with Angus and Steve turning balls over against the head. However, following a period of good defence in our 22 the hackney forward pack did manage to scrape a try back, met with jubilation from their packed home crowd. Then came a moment of madness, eager to get back on the front foot, the boys pushed into the Hackney 22, looking threatening every play, unfortunately however, big Phil got a bit lost in the centres and quickly became apparent he was way out of his depth, throwing an interception to their full back who sprinted for the long range try. Game on! 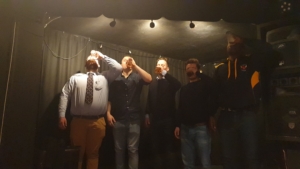 Half time came and went with an air of tension despite us clearly being the better team. Dominance was however soon restored and a number of tries followed swiftly, Marshall and Dave bossing the midfield, James and Dixey the forwards, Jamie the backs. Hackney had no answer to the onslaught and the emptying the bench made it worse form the home side. Great performance all around and well deserved win.