The day? November the 23rd.  The opponents? Fullerians. The Pitch? Well, apparently the latest suburban race-track for their “local rivals”, but it was soft-to-heavy and primed for a forward dominated game. 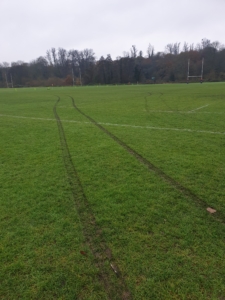 Kick-off.  The game starts with a frenetic kicking contest, each back three playing a game of “No after you” whilst successfully missing touch several times (a theme that would continue throughout the contest). The forwards – looking upward in despair – wondered if they would ever taste the sweet brutality of contact, or perhaps today was to be a day for bird watching.  A Fullerian knock-on, and those concerns were quickly put to bed.  A scrum on the half-way line, and the hammers settled into early control of the game, as the “best looking pack ever to grace the field of play” (as one mature admirer of Alex “Rich Tea” Hart put it) began doing what they do best.

The Hammers looked good with the ball. Without it, Dave Arnot began demonstrating Scottish Rugby League Hooliganism at its finest by demolishing opponents on-and-off the ball with equal ferocity. It is rumoured the Fullerians coaching staff used their fancy intercom system to get a message to the referee – “ our 12 is really a prop” – and with this new knowledge the referee threatened to smack Dave’s bottom if he continued playing so hard, and told him to apologise for being too good at ending people. 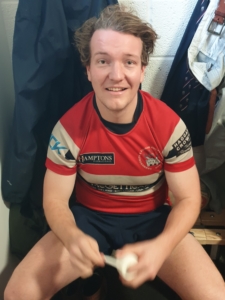 It didn’t take long for Hammers pressure to tell. A penalty – side entry to the dominant Hammers maul – by Fullerians on the half way line provided an opportunity.  A touch finder from Ben “recently single” Hatton, and the ominous prospect of a Hammers lineout within their 22 became a Fullerian defensive reality.  A throw from Zac “howyafarkengoin” Halliday, and the maul rolled on again only to be brought down before the whitewash. The forwards backed themselves, and inspired by Boris Johnston’s tactical nous, prorogued the back line and resorted to pick-and-go’s. Angus “Who wants stash” Lean finally crossing the try-line for Hammers’ first points.  A conversion from Ben “Bumble” Hatton and the Hammers were 7-0 up. 3 points quickly followed from a penalty and the Hammers stretched to 0-10 lead.

Unfortunately the remainder of the half’s last 20 minutes was a great example of how not to play Rugby, score tries, or defend a lead. Notable line breaks from James Lo, and Alex Gee came to naught. Complacency bled into a disillusionment and like Brexit, the Hammers stalled after a strong start.  Fullerians pressed hard to capitalise with 10 minutes to go in the half. A well-worked try in the corner accompanied by a kick which defied both skill and physics resulted in a 7-10 score line, and with a few minutes to half time another penalty saw the score line levelled at 10-10.  Well done to our opposition for taking their opportunities.

The second half began with the words of Coach Mark “Do I look like a B###t” Jackson, ringing in the Hammers ears. With light fading the kicks didn’t get any better, but the intensity and desire did, with Jacob “Insta Rig” Poulton musing after the game, “At times I was unsure if we were playing man or beast it was that dark”.

The pressure finally became too much for Fullerians, who decided it was easier to play with 13 men. The first yellow for after some back chat from their captain, and the second a shoulder charge on Steve “The Doctor” John.  A penalty from Ben “Right Swipe” Hatton regained the Hammers Lead 10-13.

The game resumed, a kick-off, and for a match with few notable highlights (or light by this stage for that matter)  into the fell clutch of circumstance, and by that we mean that Jordan “Get me some Vaseline” Abbott caught the kick off under considerable pressure.  Soaring like Dumbo the elephant on the 10m line, he caught the pill and charged the Fullerian forwards.  A strong run ended about 30 meters later, from which he emerged covered in blood from a slight nose bleed. 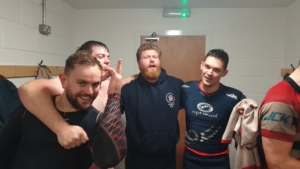 More darkness, more pick-and-go’s and the Hammers found themselves once again camped in the Fullerians 22. Phase upon phase of pressure resulted in Pete “all smiles” Benson crossing the whitewash to put the Hammers 10 points clear again.  It was a lead that was held on to until the final whistle, by which time the game was being played by the light of the moon.

MOM: Jacob Poulton, for his strong work up front in a day dominated by the piggies.

Tin Man: Ben “Love me” Hatton, for his awesome box kicks that regularly went exactly where he and the rest of the team wanted them to go.