The Hammers went into this game full of confidence, following an unbeaten spree dating back to September. Their opposition, equally assured sitting at the top of the table, albeit by a margin that had become less convincing in recent weeks. Six points yet one position, was all that separated these teams in what was sure to transpire into one of the games of the season. The build-up was equally intense, arising from multiple exchanges on an assortment of Social Media channels. There was only one victor here though with TJ Perenara, Samu Kerevi, Jacob Stockdale and Jonny May’s mother reaching out to show their support for the Hammers on this blustery winter’s day; something Alex Hart’s bean pole figure must have clearly been struggling to cope with, following his 45 minute late arrival to Old Deer Park. 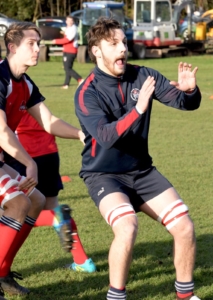 It was the Hammers who got off to the better start, dominating the opening 20 minutes, despite the early loss of Peter Benson – who lasted 5 minutes longer than usual. In spite of this ascendancy Phil Lord’s juggling career was struggling to ignite, much like Ben “Scholesy” Hatton’s love life… dropping the ball close to the line. Not even the magic of Will “Genie” Smith could produce the points, following what the ref deemed a hold up over the whitewash, the score remaining 0 vs 0. It wasn’t until the Hammers number 9 stepped up to slot the first 3 points of the game that the deadlock was finally broken. Unfortunately, the lead didn’t last for long. With the Exiles first, second and only entries into the men in blue’s 22, leading to the only two tries of the opening 40 minutes. The score 12 vs 3.

With some strong words shared at half time the Hammers came flying out the blocks. An accurate dart from Phil Lord, followed by a pin point cross field via Ben “Scholesy” Hatton had the Exiles 14 running around with what can only be described as showing the awareness of a Dodo. This gave chance to the in form Alex Gee, who despite his American-Ready endomorphic body type managed to leap high above his opposite man and over the line. One Shearer style celebration later and the score was 12 vs 8, the Hammers back in the game!

With momentum starting to build in favour of the Hammers, a quick glimpse up at Liv ogling at individuals who you would preferably take home to your parents, was enough to lead Mitch Mitchell Mitchellson IV into a lapse of concentration, as he proceeded to collide with the plague-ridden Sam “Purv” Purvis to bring the ball deep into the Hammers half. This was the beginning of a 20 minute slump for the men in blue, with the Exiles looking to apply pressure. A few strong carries followed by a quick scurry from the 9 led to the 3rd Welsh try of the match… the score now 19 vs 8. Unfortunately, this was followed in quick succession by another, thanks to the Exiles winger, whose dummy left Xander Stephen and Alex “The Bean-Pole” Hart parting faster than the Red Sea. 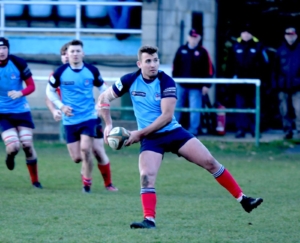 Over the next quarter the Hammers began to re-establish themselves through strong carries from both members of the Doctor partnership Steve John and Angus Lean, fresh from the set of Embarrassing Bodies. A penalty leading to a line out deep into the Welsh 22 was the opportunity that the men in blue were looking for. A robust catch and drive despite a Phil Lord trip – presumably because his sister forgot to tie his laces, set up the perfect platform for the backs; 3 passes later including one from the subdued James Lo, and Gee was over again in the corner; the score, 26 vs 13. This pressure continued throughout the final ten minutes, with the boys pressing for their third of the match. Perhaps it would have happened if Cillian “Luigi” Waldron’s hands weren’t made of butterscotch – dropping two budding interceptions in the latter stages. A few rucks, a side entry and one Jacob Poulton appeal later and the whistle was blown, final score Welsh 26, Hammers 13.

While the Hammers fell short on this occasion, they can go into their winter break in good spirits knowing that they have the ability to right some wrongs; whilst, appreciating that the strain on their backs will have additional time to recover through the absence of Cillian “Luigi” Waldron and Mitch Mitchell Mitchellson IV throughout the start of the New Year. Merry Christmas!