A surprisingly nice day brought in the first game of the decade as Hammersmith 3s travelled to Whitton Lions for the quarter final of the Bowl. The game kicked off with everyone still running off their Christmas dinners and hangovers, despite this the Hammers were soon in front though after a grubber through and a strong turnover led to a penalty, which from the resulting lineout the forwards drove over to score. Hammersmith looked fantastic in attack and scored several first half tries, finishing the half with a brilliantly executed backs move to put Hammersmith in a commanding position going into half-time 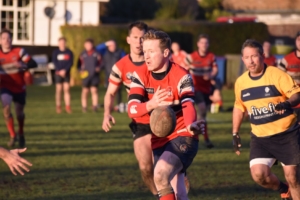 The good play continued in the second half with more tries following, however Whitton kept working and were rewarded when some slack defending in midfield got them on the scoresheet. Despite this set back Hammersmith showed ruthlessness to go straight up the other end and score. The excellent attack continued and more tries followed including Lachy who broke through several defenders to go over. Rob Vaughn then added one more pretending he was a winger crashing through the line off an inside line from the ten. The score could have been higher but Ollie Rea forgot where the try line was and dropped 5 meters short, making sure to wrap up dick of the day

Final score, Hammersmith 62- 7 Whitton, with one particular winger scoring 5 tries, Overall an excellent way to start the new decade, with lots more come in the coming year for all teams