After a disappointing end to 2019 with a narrow defeat to league leaders London Welsh ending an impressive winning streak, the Hammers 1st XV were looking to get back to winning ways to begin the new decade.

The weather gods were kind and the conditions were perfect for the home game playing host to Hackney RFC who had embarrassed the Hammers team in the first game of the season played in the Far East. Retribution was the buzz word of the day and the Hammers boys were certainly ready for dealing it out. With a team comprised of one third Aussies the game was blessed from the start.

The game started with both sides fighting hard between the 22’s but not being able to open the opposition up. Despite the efforts of both forward packs, the backline seemed to still be wiping the mince pie crumbs from their mouths and the scores remained 0-0 for the first 15 minutes.

The first points were looming however and a good attacking set of play saw Hammers on Hackney’s 5m line and after a couple of good pick and go’s Alex Harts outstretched hand landed the ball on the chalk, but apparently this wasn’t enough for the referee who signalled held up. Buoyed by this the Hammers scrum reigned supreme pushing Hackney back 5m and Angus Lean opened the account with a good try off the base of the scrum. Conversion unsuccessful and the score went to 5-0.

This seemed to be the catalyst to end the Christmas Curse and Hammers structures kicked into gear and it was too much for a less drilled Hackney side. Shortly after a well worked forward movement from Hammers gave the backs space out wide and Alex Gee ended his scoring drought and denied the end of season nudie run with a great finish in the left corner. Conversion unsuccessful and the score went to 10-0.

Hammers found their groove and had all the ball for the rest of the half which ended with another fluid movement in the backline putting Taylor Swift over the line to be converted ending the half at 17-0.

The second half began with a spirited fight from Hackney, but the first half had taken its toll and hammers quickly took the upper hand as they surged toward Hackney’s line. A show and a go and a pirouette saw Joe Carolyn through a gap planting the ball firmly under the posts. He added the extras the the bonus point try and the score was 24-0.

Again Hammers commanded all the ball and territory and in the blink of an eye James Lo slid through the defence in mid field and its said by onlookers, whom refuse to believe he passed the ball, that Lo dropped the ball backwards into the supporting arms of Angus Lean who kicked on the after burners and scored squarely under the black dot. An easy conversion saw Hammers commanding a 31-0 lead. 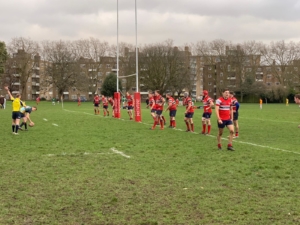 The final 20 minutes will go down in history as Jack Davies entered the field from the subs bench and a hoodoo drifted over the field.  Not more than 5 minutes later Hackney RFC strung some good phases together well and their backline looked ominous out wide. Through the hands it

went until a rogue hand came out of nowhere and a shrill cry of “denied” was heard coming from the mouth of Sam Purvis. Yellow Card number one.

Once again Hackney mounted an attack but Hammers were too good, seeing off 3 driving mauls on their own 5m line. Jack Davies however having not seen any action was hungry to get involved, threw himself life and limb into his first tackle, his fault though being that he was so effective that he was trapped in the ruck stopping a positive forward movement from the opposition. Yellow Card number two.
Jack walked off leaving 13 men to face the Hackney 15 and it didn’t seem it could get any worse. However, the very next phase from the restart Hackney attack outside, inching 1m from Hammers line before Cale Holmes seemed to steal the ball and for a split second the pressure was lifted. This dream was pierced by the shrill of the refs whistle and despite standing bolt upright, Holmes was deemed off his feet. Yellow Card number three.

The Hoodoo had reached it’s maximum point and Hammers were left with 12 men defending 15. Despite the predicament facing his men, coach Mark Jackson remained serenely calm in a situation would have sent any other mortal off the edge and he called his men to dig deep. Despite a gallant effort in defence, Hackney were too good and after executing some simple catch pass were able to put on 2 tries in the following 10 minutes. The final whistle blew and a relieved Hammers team exited the field 31-14 victors solidifying their place at number 2 on the ladder.

Thank you to Hackney RFC for what is always a tough game and it’s onward & upward for the Hammers who take on Hampstead in a top 4 clash next weekend.