It was after a heartbreaking 10-12 loss to top of the table Belsize Park that Hammersmith & Fulham 2XVs were travelling to Old Street to play against HAC hoping to start a new winning streak.

The game began quite well for H&F who obtained a line out in the opposition’s 22s after only a couple of minutes. Unfortunately, it was lost and HAC managed to make their way back to H&F’s half where they set camp for the next 20 minutes. Heroic defense never allowed HAC to cross the try line but the Hammers never really managed to get out of their half due to a poor line out and SBW-like offload attempts in the backline that didn’t end with the expected outcome.

Eventually, HAC got a clean breaks playing blindside on a scrum and came close to scoring. H&F were saved by their new number 10 Marshall MacLeod who managed to snatch the ball near the tryline. As HAC regained possession after the clearance kick and looked like their were going to spend the next 20 minutes hitting a brick wall, they eventually decided the kick a penalty when the opportunity was given. 25m to the right side of the posts and it went wide.

H&F realised that it was probably time to react and Magnus Barber celebrated his comeback to rugby by getting a penalty in H&F’s 22s which he played quickly and with good support he brought the game to HAC’s half who were then guilty of an intentional knock-on the stop the play, the first one of a long series. A good kick by French resident Louis van Langenhove and the Hammers were back for the first time in ages in HAC’s 22s. After a few phases H&F were awarded a penalty on the 22m line. Spotting that HAC’s defence wasn’t in a rush to get set, Louis vL played the penalty and thought he was off for a try only to be stopped by the referee who did not see him tapping the ball. Instead, the Hammers got a last opportunity with a 5m line out but the ball was lost and halftime was called on the beautiful score of 0-0.

The second half was more or less a remake of the first one, with HAC holding the ball in H&F’s 22s but not being able to score. As H&F’s forwards starting to get tired of defending, the scrums went backwards more and more. HAC took this opportunity to put more pressure on the Hammers’ defence and finally crossed the white wash but the ball was held up. On the following scrum, the Hammers were driven all the way back to the line and were saved by HAC’s no.8’s clumsiness who knocked the ball on whilst he only had to put pressure on it to score. 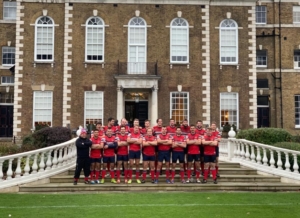 After probably 20 minutes spent in the same part of the pitch, HAC finally managed to score a try: with a scrum in Hammers’ 22s and despite a poor pass from HAC’s scrum-half that put his whole team on the back foot, HAC’s centre and captain found space out wide and one offload later a try was scored on the wing, followed by a successful conversion. HAC 7 – 0 H&FRFC.

From this moment on, the game became much more even with the Hammers finally able to put their hands on the ball. Unfortunately, silly mistakes and bad handling prevented H&F to bring too much danger. On the plus side, debutant Will Smith became a solid contender for the “Tackle of the Year” award when he absolutely dismantled his opposite man. Understanding that they would not get anymore opportunities to score a try, HAC kicked to the posts as soon as they got the possibility. From about 30m slightly to the left side of the posts, HAC’s kicker didn’t miss the target. HAC 10 – 0 H&FRFC.

With only 10 minutes left on the clock, Hammersmith & Fulham played with more urgency and finally managed to consistently go though the gainline. Following their 4th intentional knock-on of the day, HAC finally got the yellow card they deserved and it allowed H&F to settle in the opposition’s 22s. Sadly and despite another 5m line out, H&F never managed to get points on the board.