On Saturday 21st September in the baking late summer sun, Hammers 2nd XV took to the field vs Grasshoppers RFC, eager to finally kick-off their campaign after the previous week’s last-minute cancellation from Chiswick, and on the back of imperious 65-0 and 45-0 pre-season triumphs. 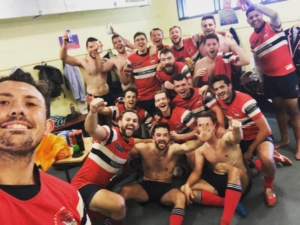 Packed to the brim with talent and plenty of players with a point to prove, the boys in red were champing at the bit to get stuck in, and sure enough, made a bright start. Grasshoppers had turned up to Hurlingham Park with an experienced pack and a powerful set of runners in behind, but unfortunately for them, the temperature wasn’t the only thing that was soaring, as the Hammers backs cut lines through the midfield and terrorised ‘hoppers in the wide channels.

Alex Jouan, in his last game for the club, was a frightful menace for the Grasshoppers backline, as he weaved and spun his way to 2 early scores. A bruising Hammers pack consistently troubled the opposition set piece, and Hammer’s superior speed and fitness from 1 to 15 showed immediately, as ruck after ruck produced quick ball for the thirsty backs to profit from.

Relentless pressure in defence from Hammers took its toll on weary Grasshoppers as the game progressed – a theme exemplified by the tireless work-rate of captain Cook – and the game began to open up.

Questions were asked of this Hammers 2s team in the mid-week, raising concerns over possible complacency following their pre-season success. But those were swiftly put to bed at the start of the second period with a string of powerful tries – once again all a product of the clockwork piston pods of the pack.

The only black mark against this cohesive and well-structured performance from Hammers was letting a soft score in from ‘hoppers, deep into the second half. The devastated reaction from the boys under the sticks said it all – as did their playing response; 3 tries in 5 minutes followed, to cap another convincing performance.

Hammersmith and Fulham 1st underwhelm against Hackney
Scroll to top