Japan’s win against Ireland set the premise for what was to be a great day of rugby at Hurlingham Park. The Japanese house music played in the changing rooms before the game served only as motivation for the squad to correct the errors of the last two weeks.

The game started with 10 minutes of heavy pressure from Hampstead attacking from deep in their half and using the wide spaces well. Some good one-on-one tackles from Taylor Williams at fullback prevented a brace of tries early on. Hampstead managed to cross the line in the left-hand corner after a flowing backs move, only for Mitch Lewis to stop the ball from being grounded. The referee deemed the tackle to be high and gave a penalty try. 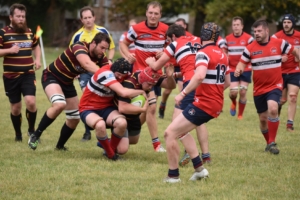 The Hammers fought back into the game through some dominant play by the forwards which eventually earnt a penalty in the opposition 22 and kicking it to touch. The resulting lineout was well won, and a subsequent maul was finished off by hooker Phil Lord, bringing the scores closer to 5-7. Hampstead recognised the threat posed by the maul and were hesitant to engage the Hammers in this for the remainder of the match.

The Hammers’ scrum remained solid throughout the game which provided a good base for the second try. Angus Lean picked from the base of a scrum 5 metres out and barrelled his way over. Joe Carolan kicked the conversion and the home team finished the half 12-7 up. 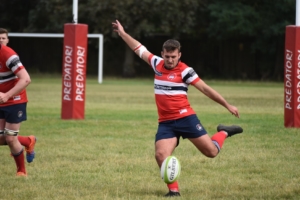 The second 40’ was dominated by gritty defence and yellow cards. A good press from the Hammers’ defence allow Hampstead little space in attack and resulted in the early part of this half being played in the visitors’ twenty-two. Mitch Lewis capitalised on this pressure to go over the line after a series of pick and goes from the forwards.

At 17-7 the tide seemed to turn and Hampstead pushed their way back into the game. Tim Williams was yellow carded for a high tackle resulting in 10 minutes of frantic, scrambled yet resilient defence from the home team. Just as Tim was preparing to come back on Taylor Williams momentarily forgot that he had to remain on his feet at a ruck and was penalised 5 metres from Hammers’ line. The referee felt the play to be cynical and while Tim was welcomed back onto the pitch, Taylor was sent for a 10-minute rest. The one-man adva

ntage finally paid off with the Hampstead scrum-half going over in the corner. Conversion successful: 17-14.

The home team controlled the game well from this point on and played the majority of the game from the opposition half. With four minutes to go, an overthrow by the opposition at the lineout allowed Steve John to go over for the fourth try and all-important bonus point.

Yet another draw against Ye Old Enemy
Scroll to top