The Hammersmith & Fulham RFC Youth Section has surpassed all expectations in their Murrayfield or Bust challenge to raise over £50,000 for the Friends of Charing Cross Hospital.

Keen to do their bit to help out in the current crisis, the Hammers Youth Section set themselves a challenge to virtually ‘pass’ a rugby ball all the way from Twickenham to Murrayfield, a distance of 535k and a total of 110,000 passes, to raise money for the hospital.

On Saturday 16th May, 186 children from the minis and youth sections of the club grabbed a ball, pulled on their boots and took to whatever bit of green space they could find at home. The idea was to raise £10,000 for their local hospital which in more normal times is on standby to bandage up cuts and bruises and deal with injuries sustained on the field. 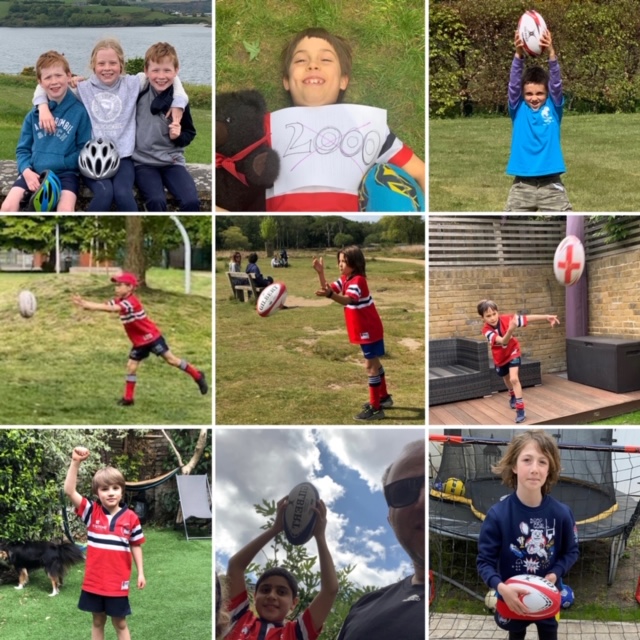 The challenge, known as Murrayfield or Bust, was the brainchild of the U9s coaches and attracted messages of support from the great and the good of TV and broadcasting including Sir Mo Farah, Joe Wicks, Dermot O’Leary, Paddy McGuinness and Ben Shephard as well as a who’s who of rugby including Dan Carter, Keith Wood, Joe Marler, Danny Care, Chris Robshaw, Michael Lynagh, Serge Betsen, Eddie Jones and Sir Clive Woodward.

The hospital sent a special message of thanks to all the participants: “A big thank you from all the trustees for raising such a phenomenal amount for our charity! We’ve just picked ourselves up from the floor after hearing the amazing news. You must be exhausted – well done to all the juniors, parents, sponsors and everyone connected to the club for smashing your targets. Your donations will make a massive difference.”

Hammers youth chairman Terry Alleyne added: “We’re thrilled that so many people at the club got involved in the challenge and made such a massive effort. I’m very proud of our club and we’re all looking forward to getting our rugby family back together again as soon as we can.”

The club set out to raise £10,000. However, in total, the ball was passed 427,339 times and travelled a distance of 2,362km to raise a staggering £50,000 for the Friends of Charing Cross Hospital. Donations are still being accepted.

You can see the messages of support here: